Working with the map window

Sending the data to Helsinki

The structure of the distribution data (.afe) files

The Atlas Florae Europaeae Data Editor (or AFEEditor, version 2010) is a program for creating text files that store the distribution data of taxa in Europe by editing the data files directly on a map. Alternatively the program can be used for viewing and editing distribution data files created elsewhere (e.g. data extracted from a floristic database).

The distribution data files are saved in the program installation directory and have the ".afe" extension. These files are kindly asked to send to the AFE Secretariat in Helsinki, where they will be incorporated into the main AFE database.

The software package consists of the following files:

By renaming the basemap2.emf to basemap.emf you can see the grid cell boundaries on the screen when creating the distribution data files. If you wish to use this option, be sure that you first rename the basemap.emf file to something else.

Working with the map window

When the program is started, you first have to give your name ("Last name, first name"). This data is stored into the distribution data files created by the program.

Next the map of Europe is drawn onto the screen, with red circles showing the grid cell locations. The circles can be hidden by removing the tick mark from the Show Grid item in the Options menu. Distribution data can be edited only when the grid cells are visible.

The size of the map window can be changed using the control buttons in the upper right corner of the program window, and by placing the mouse cursor over the border of the map window, pressing the left mouse button down and then by dragging the window border to the desired size.

A portion of the map can be zoomed by pressing the right mouse button down and then by dragging a rectangle onto the map. To view the whole map again, right click any location on the map.

To be able to edit distribution data,

2) select the AFE territory for which you wish to record distribution data; the grid cells of this territory appear as red circles on the map

3) select a taxon using the New or Open command of the File menu. The name of the selected taxon is shown in the upper left corner of the window with bold text.

To make the data entry to a certain grid cell possible, the grid cell must be made active by selecting it with the left mouse button. The selected grid cell is then surrounded by a red square and its name (e.g., 35VLH3) is shown in the upper left corner of the window in bold text.

After a taxon has been selected, and the map has been made editable by activating the Show Grid item in the Options menu, and a grid cell has been selected for record entry, the following type of data can be entered in the uppermost part of the program window:

Status. The combo box displays eight choices to select from.
The status combo box can be activated by selecting it with the mouse or the tabulator. Once the combo box is active, the values of status can be chosen by mouse, by writing the first character of the status description, or by the arrow keys.
After a certain status has been selected, the corresponding map symbol is drawn onto the map as shown in the image below. 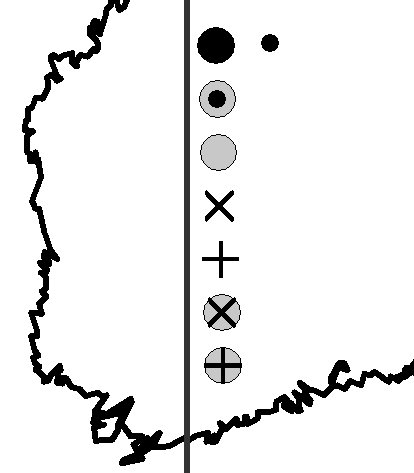 The "absent" value can be used to remove a record from the map.
Note that the symbols have changed from those  used by the AFE Date Editor program during the preparation of AFE vol. 13!

AFE territory. The combo box lists, in alphabetical order the territories used in AFE. When a new cell without a territory abbreviation is selected, the territory last chosen will be copied.

Territory uncertain. Place a tick mark into the check box if the AFE territory is uncertain (e.g., old records from imprecisely described localities cannot sometimes with certainty be assigned to a certain AFE territory if the country boundaries have changed in the area).

Data entered by.  When a new cell without the AFE collaborator name is selected, the value will be copied from the last selection with a collaborator name. Note that this value will be used to store the name of the person that provides the data form AFE by using the software  - it does not mean the person(s) who originally recorded a certain taxon in the selected grid cell (this kind of data may be stored to the text box "Notes").

Identification uncertain. Place a tick mark into the check box if the identification of the taxon is uncertain. The record will be shown as a small black dot in the map. Note that you must also select a status category other than absent to see the symbol on the map (and store the record into the distribution data file).

Location uncertain. Place a tick mark into the check box if the the grid cell is uncertain. The record will be shown as a small black dot in the map. Note that you must also select a status category other than absent to see the symbol on the map (and store the record into the distribution data file).

Notes. A text box for entering comments on the record source and for giving explanatory notes on the selection of the values of status and other items. The length of the text that can be entered is not limited to what is shown in the program window (max 64,000 characters).

The Save command in the File menu saves the distribution data into an ASCII text file in the program installation directory. These distribution data files have the .afe extension. A separate .afe file will be created for every taxon. The structure of these files is explained below.

Moreover, the distribution data files (.afe) can be created outside the AFE data editor program, and can be read into the program after placing them into the program installation directory.

After exiting the program, please do take backup copies of the distribution data files.

Sending the data to Helsinki

When ready, the distribution data files (*.afe files in the program installation directory) are asked to send to Helsinki where they are incorporated into the central AFE database.

The structure of the distribution data (.afe) files

The distribution data files have the .afe extension and they are stored in the program directory. They are CSV files (comma separated value files). The values of the different variables are separated by commas and text variables are placed within quotation marks. The .afe files are created separately for each taxon. The first line contains the taxon name and other lines the distribution data for each grid cell in which the taxon has been recorded. An example for Fragaria viridis in Fe:

The records of the .afe files consists of eight parameters as explained in the table below (example values of the first record of the Fragaria file listed above are shown in the first column):