In 1674 Alftanus, reverend of Isonkyrö-village wrote that humans bones have risen up from the  Levänluhta spring “throughout the ages”. Archaeological investigations on the site, situated near the Kyronjoki River, were conducted in 1886, 1912 and 1982–1984. Among the object discovered from the Levänluhta spring area were jewellery, wooden stakes, a bronze kettle – and the skeletal remains of ca. 100 individual humans. The site is unique in Northern Europe. The iron-rich red water foaming up through the groud in the springtime adds to the mysterical nature of the site. 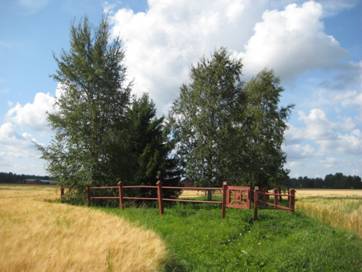 The Laboratory of Chronology takes part in a multidisciplinary research effort, coordinated by archaeologists form the University of Helsinki, and funded by the Eemil Aaltonen foundation, where the mysteries of the Levänluhta water burial site are investigated using archaeological and natural scientific methods . Radiocarbon datings will provide the timeline for interpretations of the people’s diet and subsistence patterns which will be studied based on stable isotope analyses of the bones.

The period of use of the Levänluhta burial site coincides with a climatic anomaly that took place 1500 years ago. According to written sources, mostly from the Mediterranean realm, the sun was dimmed for 18 months during the AD 530’s  - a phenomenon observable in tree-ring  records as very low growth and frost damage across the northern hemisphere.  The project takes advantage of tree-ring isotopic analyses performed (in the CARATE-project), to better understand the impacts of the calimte anomaly to the lives of the Iron Age people in the Levänluhta region of Western Finland.