The Atlas Florae Europaeae (AFE) grid system was changed in 2000 (after AFE vols. 1 - 12) on the basis of the Paris 1998 meeting of the representatives of the atlas groups mapping the European vascular plants, mammals, birds, amphibians, reptiles, fungi and invertebrates. As before, the new grid system is modified from the Universal Transverse Mercator (UTM) co-ordinates and the Military Grid Reference System (MGRS), as defined in the official documents of the U.S. National Imagery and Mapping Agency (NIMA). The technical manuals of NIMA (Datums, Ellipsoids and Grid Reference Systems, TM 8358.1; The Universal Grids: Universal Transverse Mercator (UTM) and Universal Polar Stereographic (UPS), TM 8358.2) defining these systems are available as html and pdf documents at the web server of NIMA. The grid system of AFE is based on the World Geodetic System 1984 (WGS84) datum. 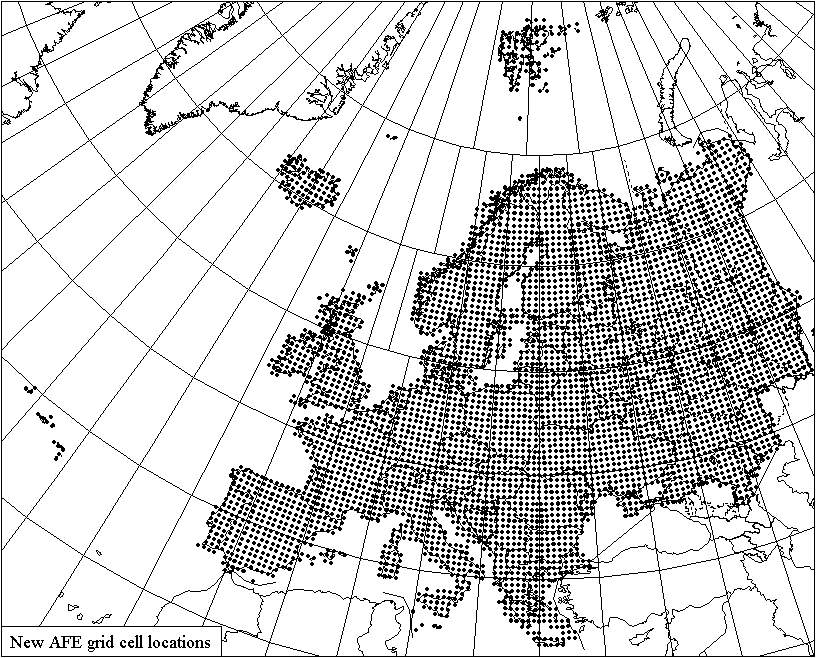 Fig. 1: The AFE grid cells with land in Europe.

The grid cells are bounded either by the "full" 50-km lines of the UTM (exclusively so in Albania, Baleares, Sardinia, Sicily, Slovenia and Turkey) or also by the boundaries of the MGRS zones. The deviations in the limits of UTM and MGRS are taken into account so that in the North Sea and in band X the grid cell boundaries are based on MGRS. Unlike before, the grid extends over terrestrial and marine areas following a regular pattern, without any deviations for coasts, islands, peninsulas, mountains, towns etc. There are c. 4750 cells with at least some land in Europe as delimited in AFE. In the old grid system there were 4419 grid cells.

Fig. 3: The pattern of merging the slices into the AFE grid cells.

Projection: UTM 35N. – Note the narrow slices cut by the zone boundaries (left). Depending on the width of the southern edge, the slices bounded by zone boundaries treated as independent cells (width 33.3 – 50 km), merged with a similar slice on the other side of the zone boundary (width 16.7 – 33.3 km), or joined to the adjacent cell in the same zone (width < 16.7 km).

Became the meridian convergence the UTM / MGRS zones are narrower towards the north. The basic rules for merging the slices smaller than 50 x 50 km with the other slices are:

Exceptions to the above rules are caused by the differences between the UTM and MGRS zones: 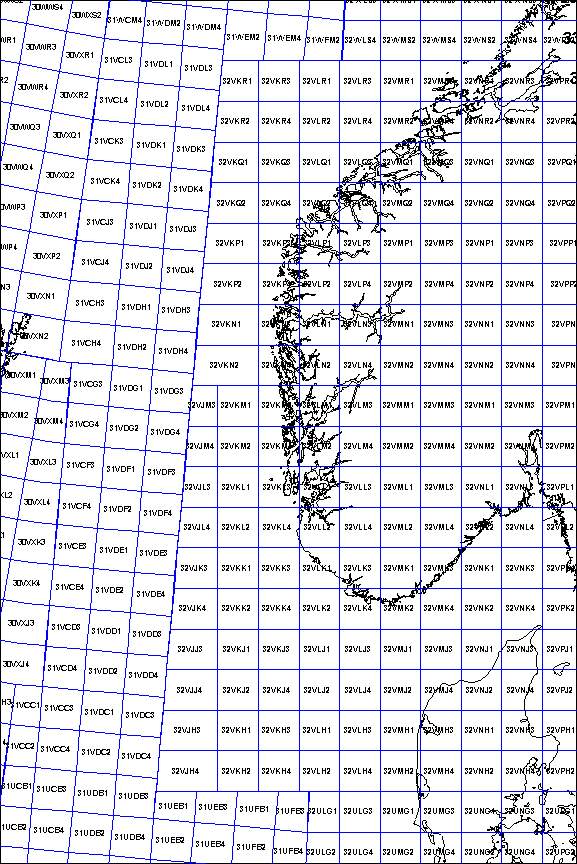 Fig. 4: The AFE grid cells boundaries in the North Sea and surroundings. 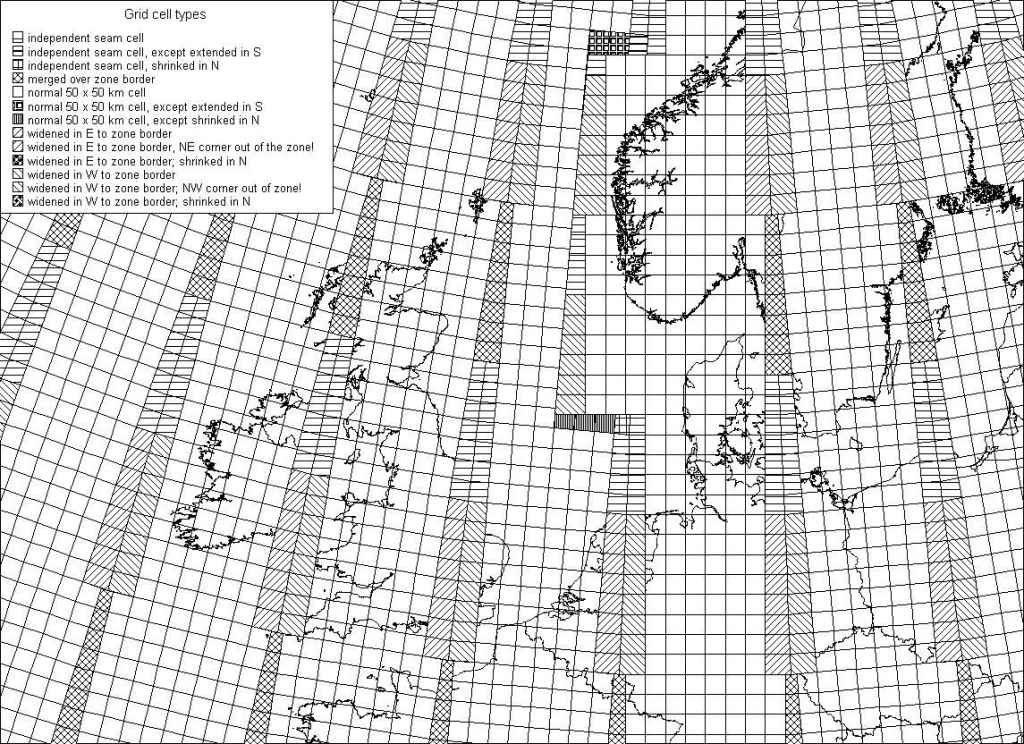 Fig. 5: The AFE grid cell boundaries and cell types in the North Sea and surroundings. 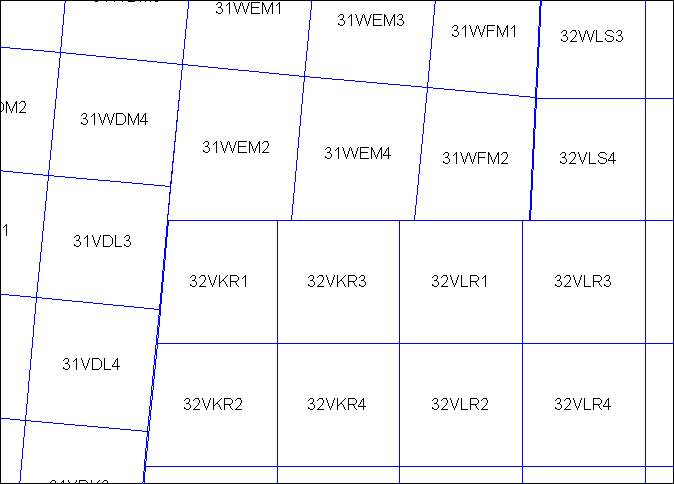 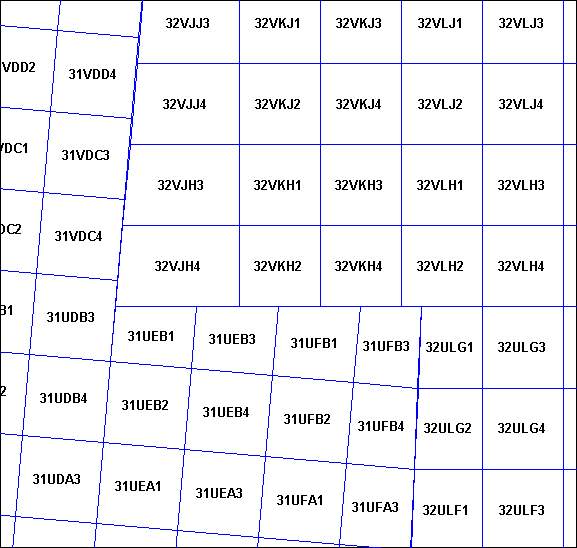 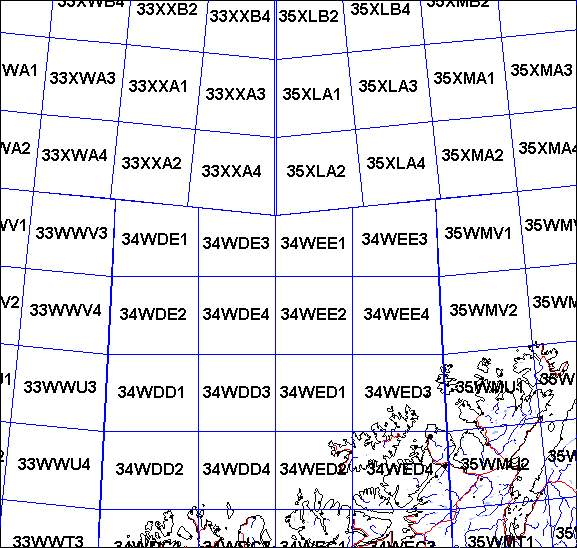 Fig. 8: The AFE grid cell boundaries at the northernmost part of 34W. 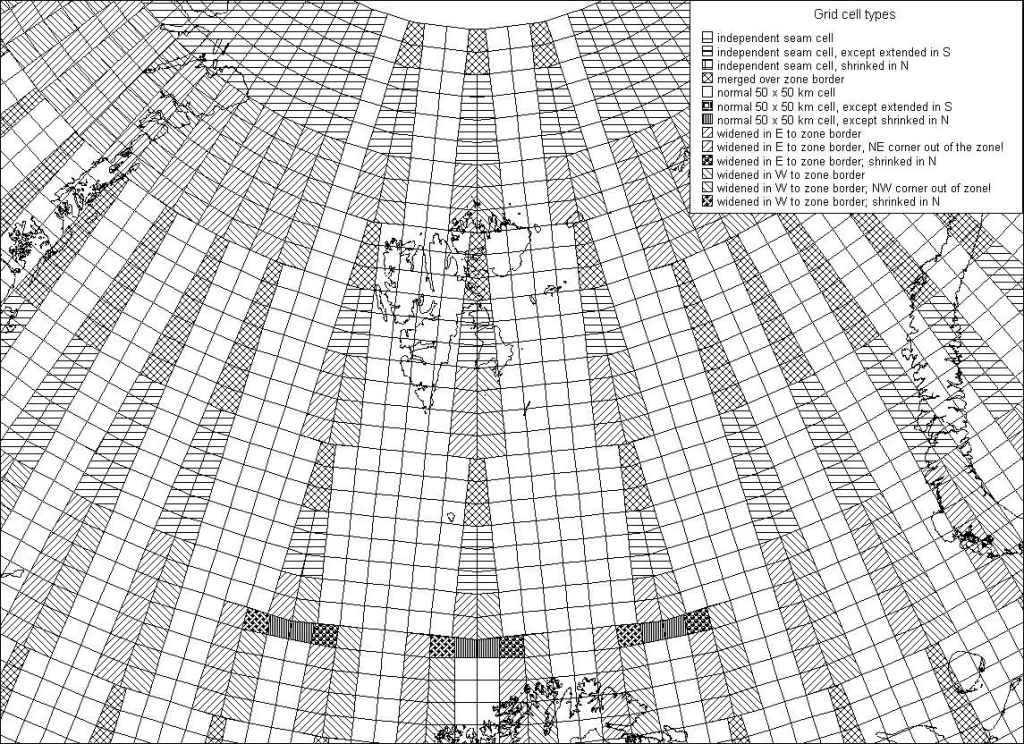 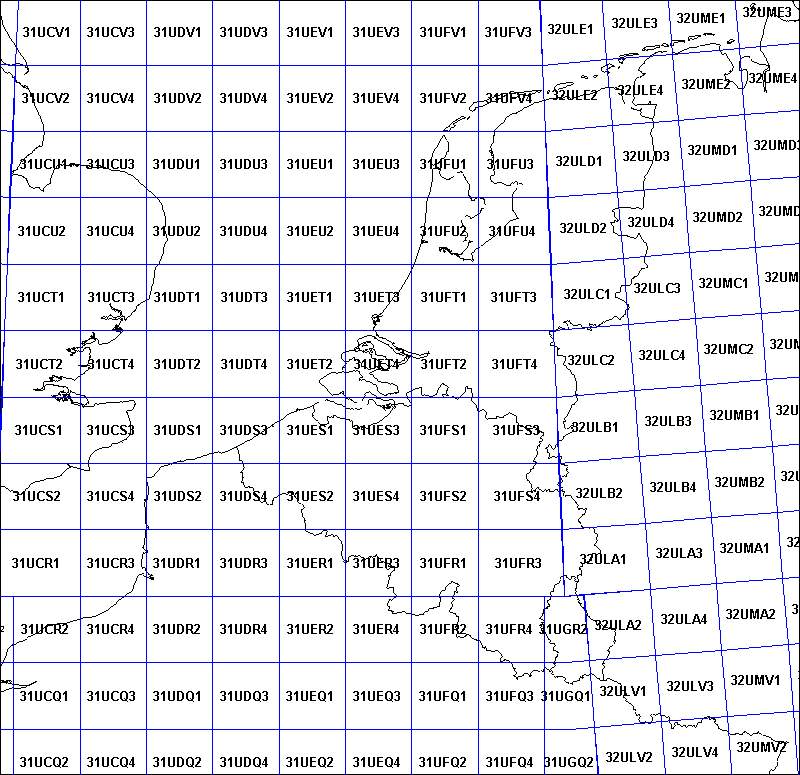