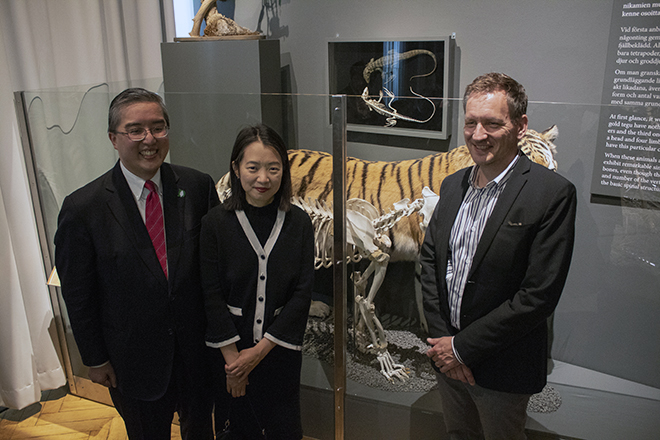 This rare skeleton has been a part of the collections of the Finnish Museum of Natural History Luomus since 1857. However, it took a donation to make its true value apparent.

The Story of Bones exhibition at the Museum of Natural History received a new star on Wednesday, 15 August, when an extremely rare skeleton of a Javan tiger was put on display.

Previously, there were only 88 known skin and bone samples of the species, which went extinct in the 1970s.

This makes Luomus’ skeleton number 89. As the Javan tiger at Luomus is a complete skeleton, it is one of the finest specimens. The skeleton was restored for the exhibition thanks to a donation from Steven and Anne Tseng.

”I feel very grateful for being able to help the Museum of Natural History display the Javan tiger,” says Steven Tseng.

“Natural history museums are very important to me. When I moved to Finland in 2001, the Museum of Natural History was one of the first places I visited in the country. Even though it is not particularly well known internationally, I was immediately impressed by the Museum’s high standard.”

Long-term friends of the Museum of Natural History may remember the tiger skeleton. Acquired in 1857, the skeleton was displayed at the Museum already during the 19th century as part of the private collections of Evert Julius Bonsdorff, professor of anatomy. It became the property of the Museum in the 1950s.

The last time the tiger was put on exhibit was in 1997.

However, the skeleton had previously been assembled in an incorrect pose, and its precise subspecies was uncertain – 19th century data is not always reliable. Consequently, it has been dubbed a generic “tiger” in previous exhibitions.

However, a research group led by Henry Pihlström confirmed that the skeleton was that of a Javan tiger, a young male. The confirmation of the subspecies greatly increased the value of the skeleton. Consequently, it was taken out of storage, disassembled are meticulously rebuilt.

“We cleaned all the bones and degreased them. This means that essentially they can now be preserved indefinitely,” says Senior Museum Technician Janne Granroth.

In the reassembly process, the pose of the skeleton was fixed. Now the tiger no longer has an unnaturally concave back, and he is stepping on his toes as a feline should.

The Luomus Javan tiger was a perfect skeleton, missing only a few nails. This was remedied through the magic of modern 3D printing.

“We took one nail and scanned it. By adjusting its size and mirroring the shape, we were able to use that scan to print all missing nails,” Granroth explains.

All in all, the restoration process took more than 250 hours of work.

”The Tseng donation made this work possible, and I am very grateful,” says Leif Schulman, director of Luomus.

“We have more than 15,000,000 specimens of animals, plants, fungi, fossils and rocks, and 150 members of staff. This means we have more than 100,000 specimens for each employee. There is no way we can analyse and restore all of them with the staff we have. Donations enable us to do new, different things, and every donation is a significant support for the Museum and the University of Helsinki.”