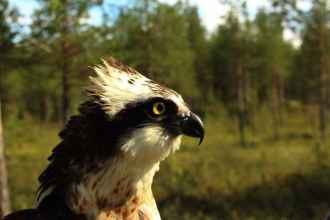 This page is not updated any more, Kainuu region ospreys are now tracked in new page Kainuu Satellite Ospreys.

Male satellite Osprey Ukko was captured 30.7. 2015 by the working group of Osprey Foundation (Vesa Hyyryläinen and Heljä Pylvänäinen) in Kainuu region in the middle of Finland. The new age GPS-GSM logger was fitted at the same time. The following day a male nestling (called Tommi) of the same nest got its own logger.

Male Osprey Ukko got an aluminum ring with M-68466 to his right leg and a red plastic ring with a white inscription FC on his left leg.

Have a nice trip! 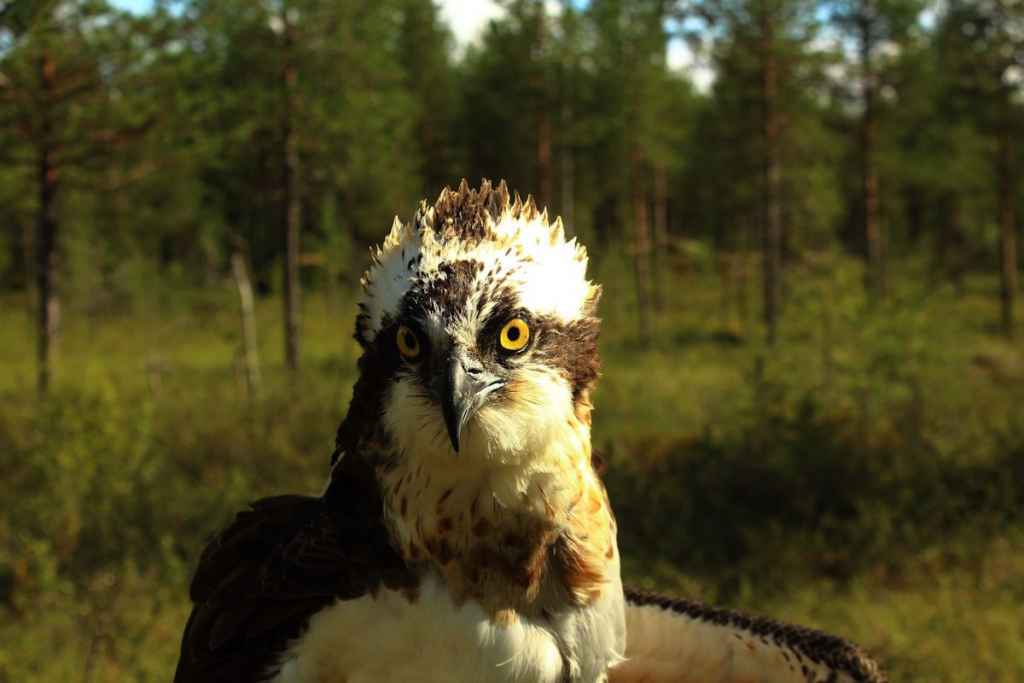 Ukko the Osprey arrived at his nest.

After the last positioning Ukko has moved about 500 km northward. Last night it was sleeping in a Russian woodland 110 km west of Moscow.

Ukko the Osprey continued his spring migration route in Ukraine straight to the north 470 km. At midnight he was at the river Seyim about 1,580 km from his breeding area.

On 16 April Ukko flew over the Black Sea and took a night break in the lowland of Ukraine. Very early in the morning on 17 April he was flying NE near Mariupol.

After the last positioning Ukko has moved over 1,000 km northward. He´s in the middle of Turkey in Yozgat area. Ukko is now 2,800 km from his breeding area in Finland.

Ukko took a night brake ashore of Gulf of Suez in Egypt. Ukko has now flown almost 3.900 km NE, a little bit under than a half of his spring migration journey.

Ukko the Osprey started his spring migration early in the morning.

Ukko the Osprey arrived at Gabon on November 9th. He has settled down at once in a famous national park Akanda very near the capital Libreville. Ukko´s linking only 36 km NW from Jaska in the same Estuaire province.

After the last positioning Ukko has moved 1,030 km southward. He stayed last night in a woods near Ebolowa town in the southern part of Cameroon. Ukko´ll achieve the wintering site of Jaska the Osprey very soon.

Before noon 16 October Ukko was fishing at the Lake Nasser in Egypt. After that we got the next location as late as 30 October. Ukko is flying SW in the area of Chari-Baguirmi in the southern part of Chad. He´s now 6,050 km SSW from his breeding area in Finland.

Ukko took a night brake in Israel near the border of Egypt and afterwards moved 270 km SSW across the Sinai. He spent some hours ashore of Gulf of Suez and was flying southward very early in the morning.

On 7 October Ukko arrived at the western part of Syria. Afterwards he´s moved southward in the Middle East. At noon 10 October Ukko´s flying in Jordania near the Dead Sea.

Ukko has moved 250 km southward per day. On 2 October he arrived at Crimea and flew over the Black Sea at once. In the afternoon 5 October he´s flying SSE about 130 km SE from the capital Ankara.

Ukko flew 370 km southward and took a night brake in Ukraine near Komsomolsk.

Last days Ukko has been taking a brake by fishing and resting near Severnaya Polyana in Russian countryside.

Ukko has slowly moved to the south in the lowland of Russia. He is now 1410 km south of his breeding area near Ukrainian border.

Ukko the Osprey continued his autumn migration. In the morning 16 September he was flying southward 160 km west from Moscow.

Ukko flew to the southeast via Russian Karelian area. Early in the morning 13 September he was flying southward near Tver 790 km south of his breeding area in Finland. Ukko´s migration route is very similar to Tommi´s route.

Ukko the Osprey started autumn migration early in the morning. During the day he flew 130 km southward and stayed overnight in Lake Savijärvi.