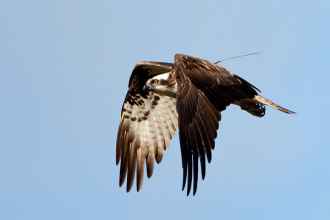 Since 2002, a total of 14 Osprey individuals from Häme have been tracked by satellite: eight nesting males, two nesting females, and four yearlings. In 2002-2006, data in accordance with the general goals of satellite-tracked Ospreys was gathered. In 2007-2014 in Häme, the objective, besides the general goals, was to gather data on how much Ospreys nesting at different distances from the foundation’s Pohtiolampi Osprey centre avail themselves of the rainbow trout supply at the centre. In 2014, the male Osprey Ilpo, the female Helena, and their female fledgling Birgit from Renko were selected to represent Finland, along with a family from Utsjoki, in the international school project World Osprey Week (WOW). The transmitters for the Ospreys from Häme have been funded by Vattenfall Oy (2002–2006), UPM (2007–2014), and the Finnish Cultural Foundation (2014-2016).

Autumn migration of Häme Ospreys in 2020

The male Osprey Ilpo from Renko, who is part of the international school project, was named after Ilpo Painilainen, who participated in an Osprey project in the 1970s. On 17 July 2014, a taskforce from the Osprey Foundation including Ilmari Häkkinen, Juhani Koivu, and Harri Koskinen fitted Ilpo with a 30-gram Microwave GSM/GPS transmitter running on solar power. Ilpo, with an aluminium ring M-55992 and a red ring X3, and weighing 1,390 grams, had been ringed as a nestling on 30 June 2008 near Sääjärvi in Janakkala.

After the manufacturer had repaired it, the solar -driven Microwave GSM/GPS satellite transmitter weighing 30 grams that had been carried by Helena, the Osprey that died at a Ukrainian fish farm, was fitted onto a male Osprey nesting near Kernaalanjärvi in Janakkala. The catching of the Osprey and the fitting of the transmitter were done by a taskforce from the Osprey Foundation including its director, Juhani Koivu, ringer Harri Koskinen, and bird-watcher Matti Aaltonen, who gave them a lift in his boat. Pertti Saurola ringed three healthy fledglings during the action. Further, the American Osprey guru Alan Poole came along to study Finnish Osprey research. The unringed male Osprey, weighing 1,395 grams, gained an aluminium ring M-68134 on his right talon and a red ring CP on his left, and the name ‘Alan’ after our international visitor.

The female Osprey Helena, who was part of the international school project, was named after the wife of Ilpo Painilainen, who participated in an Osprey project in the 1970s. On 17 July 2014, a taskforce from the Osprey Foundation including Ilmari Häkkinen, Juhani Koivu, and Harri Koskinen fitted Helena with a 30-gram Microwave GSM/GPS transmitter running on solar power. Helena’s (M-48999, yellow ring Z9, weight 1,745g) background was unknown and she was not ringed until the same day she was fitted with the transmitter.

On 16 August 2014, the Osprey Foundation taskforce with Ilmari Häkkinen, Juhani Koivu, and Harri Koskinen fitted Birgit the Osprey, part of the school project and hailing from Renko, with a 30-gram Microwave GSM/GPS transmitter running on solar power. At this stage, she was a fully flighted yearling. The brood included another yearling. 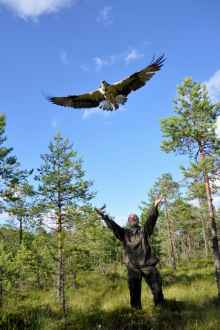 The nest of Ilmari the Osprey was located west of Hämeenlinna, in a forest filled with small lakes, owned by the National Board of Forests, over ten kilometres from Vanajanselkä and far from any fish-farming basins. The taskforce with the Osprey Foundation agent Juhani Koivu and ringer Harri Koskinen, the team specialised in catching adult Ospreys, also included the chair of the foundation, Ilmari Häkkinen. They fitted Ilmari the Osprey with a 30-gram Microwave GPS-Argos satellite transmitter on 2 August 2012. After working hard for a few days, the taskforce had managed to catch a male Osprey who filled the criteria set for nest location and male Osprey. The male M-48035 weighing 1,370 g, who was named Ilmari after the chair of the foundation, had been ringed as a nestling, so its background, i.e. exact age and hatching location were known. Ringer Jukka Tanner had fastened the ring on Ilmari eight years previously, on 5 July 2004 in Hyvinkää, 50 km from Ilmari’s present-day nest. In order to make field readabilty easier, a red plastic ring was added to Ilmari’s right talon, with the engraved white letters JK on their side. 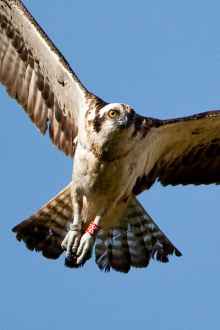 On 31 July 2009, Juhani Koivu, Harri Koskinen, Pertti Nikkanen, and Helmi-Irene Saurola managed to catch a male Osprey weighing 1,350 grams at Äimälänniemi in Pälkäne. He was given the ‘human’ name Jukka after Jukka Syrjänen, who has worked at the Pohtiolampi Osprey centre for many summers. The nest of Jukka the Osprey is located in a forest previously owned by the Syrjänen family, 19.7 km from Pohtiolampi. Unfortunately, we do not have any information on Jukka the Osprey’s background, i.e. date or location of birth. Ringer Harri Koskinen registered Jukka only now, as an adult, into the ring register under his 'official name,' M-59925. In addition to the aluminium ring attached to his right leg, Jukka received a red ring with the code PS engraved in white on his left ankle. Jukka was fitted with the 30-g Microwave GPS-Argos satellite transmitter that had been found beside the remains of Pete the Osprey, and which had been serviced in the USA.

On 14 July 2007, the team – consisting of Juhani Koivu, representing the Osprey Foundation, Pertti Nikkanen, the person in charge of ringing at the nest in question, and Helmi-Irene and Pertti Saurola who fitted the transmitter – caught male osprey M-39991, weighing 1,430 g, in Lempäälä near its nest. They fitted it with a solar-powered 30-gram Microwave GPS-Argos satellite transmitter. Male Osprey M-39991 had been ringed as a nestling eight years earlier, on 7 July 1999 at Valkeakoski, 11 km from his present nest. The Osprey was named Pete after his ringer, Pertti ‘Pete’ Nikkanen. In order to improve field observations, Pete was fitted with a red plastic ring marked CC in white letters. It turned out that Pete’s mate was Osprey female M-35181, weighing 1,800 g and five years older than Pete. She had been ringed as a nestling by Jörgen Palmgren on 17 July in Tammisaari, 158 km practically due south from her present nest. This pair of Ospreys had three nestlings to feed.

Data on the satellite tracking of Mirja, Victoria, Laho, Vihtori, Sarsa, Justiina, and Kaarina will be published later.