Animals are mounted in many different ways depending on the species and its purpose. The majority of the taxidermic animals in the museum's collections have been found dead in nature or died in a zoo.

All large mammals waiting for preparation for the exhibitions are examined immediately upon their arrival to the museum. Their bodies are carefully measured and their heads are sometimes used as a cast for a death mask. The animals are then skinned, the skin is tanned and the bones are cleaned. After this begins the hard work of restoring the animal’s natural form.

The history of taxidermy 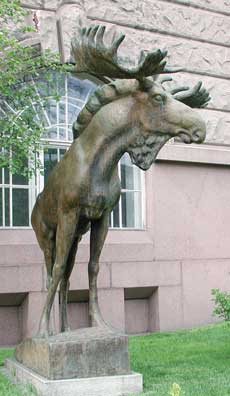 Taxidermy has a long history in Finland. Our first taxidermists, Magnus von Wright and Jussi Mäntynen, were the best in their field. On top of that, they were significant characters in our cultural history. Both of them are better known for their art than for their taxidermy.

The collection of materials also has a long history in Finland. The first collection journeys were made as early as 200 years ago. The journeys soon extended to all continents. Earlier, actual hunting had a great significance in the collection of vertebrates. Nowadays, the majority of mounted animals are found dead in nature or died in a zoo. However, the collections of the Natural History Museum still hold over 200 bird specimens that Magnus von Wright himself shot and prepared.

The oldest prepared vertebrates at the Natural History Museum are the handwork of Magnus von Wright. Von Wright was introduced to taxidermy already in 1820’s when he was exploring the collections of Stockholm’s Naturhistoriska Riksmuseet with his brother. He was looking for models for his drawings. In Finland he had stuffed birds for the collections of Finland’s oldest scientific society, Societas pro Fauna et Flora Fennica. When he was given the position of the taxidermist at the Animal Museum in 1845, he returned to Stockholm to study the newest techniques in taxidermy and the sorting of collections. Later in 1850 he travelled to St. Petersburg 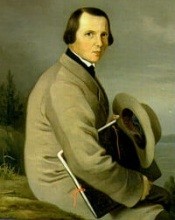 to expand his studies. In 1859 he published the first guide book on the birdlife of Finland. He held his position as the taxidermist of the Animal Museum until his death in 1868. Almost half a century passed before the Museum could find a successor to him.

The second taxidermist of the Natural History Museum was Johan Richard Mäntynen, better known as Jussi Mäntynen (1886-1978). Like other nature hobbyists of his time, Jussi Mäntynen was a hunter. However, he loathed throwing away dead animals and to reduce the “waste” he started to stuff the animals he killed. His taxidermist career began as he started to stuff animals for educational 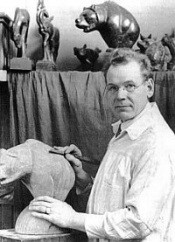 purposes. Through 1902-1905 Mäntynen studied in an art school of the Finnish Art Society and through 1910-1920 he developed his crafts as a student of the sculptor Alpo Sailo. At the same time he worked as an assistant preparator at the Animal Museum and after 1917 as a preparator. He was given the position of the museum’s taxidermist in 1919.

As the museum’s taxidermist Jussi Mäntynen renewed the museum’s taxidermy traditions significantly. Earlier, taxidermy had meant stuffing animal skins with straws, excelsior or carpet rags, without even trying to make it resemble a living animal. Mäntynen imported a new way of mounting animals to Finland, developed by the American Carl Akeley. This was called the sculpting method, and it aimed to portray the animals in natural groups. He focused especially on creating anatomically accurate details, and so he managed to capture the movement of living animals to the taxidermic sculptures.

As a sculptor Mäntynen made his breakthrough with his exhibitions in Stockholm in 1934 and in London in 1939, after which he left the Zoological Museum and moved to Stockholm. Today one can admire his sculptures in parks all around Europe and the United States. His interest for animal themes remained through his sculpting career. The bronze moose statue in front of the museum is one of Mäntynen’s creations. 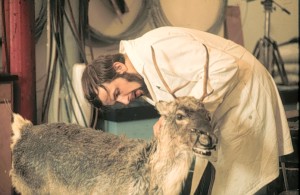 In 1971, Eirik Granqvist was given the position of the Zoological Museum taxidermist. Thanks to him, the whole third floor was renovated into diorama exhibitions. The Finnish mammals section of the mammal room was completed in the March of 1976, consisting of 42 dioramas. Granqvist also made two material collecting trips to Africa. Most of the current dioramas depicting African animals in their natural habitat were born as a result of these journeys. The wide array of Eirik Granqvist’s expertise also included paleontological taxidermy and anthropology. In 1979 he was assigned to the duty of mounting a 36 000 year old mummified bison that gold miners had found in Alaska. Today the same bison is located in the University of Alaska Museum of the North in Fairbanks. In 1987 Eirik Granqvist moved to Southern France, to the village of Bidon, where he built the anthropological diorama exhibition called Prehistorama. Prehistorama covers the origin and evolution of humans and it is nowadays located in the village of Rousson, also in Southern France. 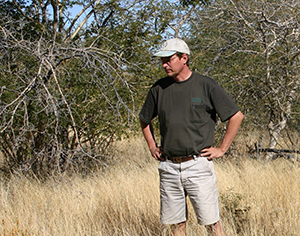 During the short period that Tapani Kuivanen was the museum’s Chief taxidermist (1988-1992), an african elephant brought by Eirik Granqvist from Africa was mounted to the museum lobby. It was casually christened as “Elmeri” by the visitors. In 2005, a comprehensive basic renovation began in the museum, and the whole museum had to be emptied. This also meant the evacuation of Elmeri. He returned to the lobby in the spring of 2010 when the World Nature exhibition was opened. 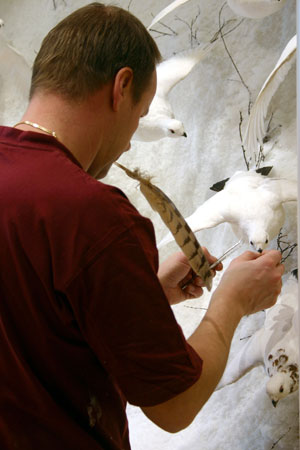 In the July of 1992, Ari Puolakoski started his career as museum’s Chief taxidermist. The basic exhibitions were renewed actively until the early years of 21st century, when the exhibitions consisted of fish, bird, bone and mammal specimens. Nearly 150 dioramas were created for them. In them, the animals were portrayed in their own habitat. In addition, the fourth floor held an exhibition about the history of life.

As the museum’s renovation began in 2005, all the dioramas built during the earlier decades had to be documented, deconstructed and moved to storage. This was necessary for the complete refurbishment of the museum.

As the technology in the building was modernized, the exhibitions also got a complete makeover. The plans for changes were made in tight collaboration with the team responsible for the exhibitions. Because of the tight schedule, it was not possible nor necessary to remount all the animals. Instead, the previous mounted animals were used when possible. The renewed exhibitions were built in few years and in the May of 2008 the museum was reopened to the public. In 2015 Puolakoski won at the European Taxidermy Championships the First Place in Award of Excellence with his cave lion reconstruction. Today in the Museum of Natural History one can explore the exhibitions on Finnish and World Nature, for example.