Cephalopods are a diverse group of mollusks; cuttlefish, nautiloids, octopuses, and squids are the most well known of its living representatives. The evolutionary history of cephalopods dates back into the Cambrian period nearly 490 million years ago. Since then cephalopods underwent major evolutionary changes and highly diverse groups, such as ammonoids and belemnoids went totally extinct. Today the internally shelled coleoids are most diverse. 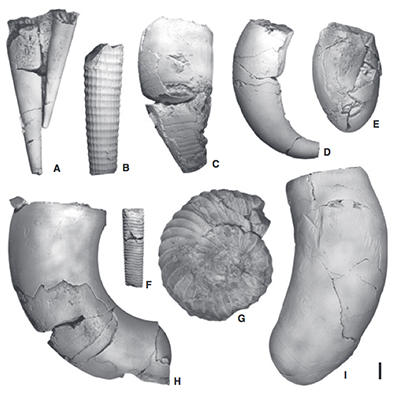 The earliest cephalopods had an external shell, like the pearly Nautilus today. Repeatedly this shell was reduced and internalized. During their first climax cephalopods evolved to an extreme diversity of form with long conical shells, screwed, coiled, and pea-like shells ranging from millimeter to several meters in length. Some groups have been very abundant in the ancient seas and played important roles in different marine ecosystems.

My work focuses on cephalopods of the Early Palaeozoic period, comprising the first diversity climax before the advent of the ammonoids and coleoids. The careful taxonomic description of fossil assemblages and its systematic classification is always the basis of my later analysis of their phylogenies and their ecology.

Recent contributions are descriptions of Ordovician fossil assemblages from Baltoscandia, France and Morocco. Together with my colleagues Jakob Vinther and Dirk Fuchs I published a review of the originof the cephalopods and its early evolution.